Skip to the content
Hey everyone! We are building a city in this server, if you want to check how is going join the server.
The server is not 24/7, you can join only if the server is turned on. It will be turned on for sure 5 September at 10:00 am (CEST)

We just added a brewery plugin that allows people to brew different kinds of alcohol and age them! Try it for yourself!

As its name states, this server has 2 different things you can get yourself into. First of all, its a whitelist SMP, with a generally small (trying to grow) community. The SMP is based around the spawn city of Senioritia.

Instead of having spread out bases with infinite land, we prefer to build a dense city, with many different architectural styles incorporated in it. You can build anywhere that isn’t already being built. The city focuses on real life architectural styles, and you can find Colonial/Georgian, Greek Revivalist American mansions, Romanesque Revival buildings, Brutalist, Post-Modern, and present day architecture in the city. The city is comprised of districts﻿ with their own unique styles and vibe, contribute to the city’s architecture, create your own district, and leave your mark on a city built with many hands!

Our goal is to create a real large urban area in survival Minecraft, incorporating stores, government departments and service buildings, and residential areas. The city also boasts lots of public spaces, including squares, parks, and a large community built WIP swamp bayou, on which many plan to put Louisiana style mansions along. To add atmosphere, the world decays over time, untended land has trees regrow and tall grass flood the area. Underground caves decay and grow vines over time. The city incorporates named roads, and addresses, along with basic building regulations and laws that anyone can suggest! There are specific departments to the maintenance of parks, etc, and we try to create a realistic and functional of a survival city as we can!Emeralds are money, which promotes the creation of autofarm towers which add to the urbanization of the city.

But just building always gets boring doesn’t it? That’s where the Endgame part of the name comes into handy.

In this server, mobs level up in power the farther you go from spawn. At around 7k~ blocks from spawn, the first tier of Endgame mobs begin to spawn. Endgame mobs drop impossible enchants like Sharpness 7, 8, 9, and even higher! The endgame uses a tier based drop table (lvl 70-84 drops sharpness 7, lvl 85-94 drops sharpness 8…etc) These mobs will put minecraft to the test requiring you to build specific mob killing outposts, walls, trenches, and everything you’ve seen in the minecraft guides but never actually used because vanilla mobs are so useless. These mobs have server-custom low drop chances, and add a whole new grind to the game if you choose to obtain the super enchants. And there are guns. All the weapons are balanced specific to the server. The server follows an RPG progression, so the more time you spend the more infinitely powerful you can become. We also have Golden Enchants for custom enchants.

There is a decent amount of server politics, with a runthrough being the server has been controlled by the capitalist MegaCorp regime, but recently, the power dynamic is being shifted to the new AquaCorp.

NOTE: this server wasnt completely designed to be used on a large scale, and is more designed for a small community, which is why there are so many “random” features because I like to add them as I see them. The server plugins can be rough around the edges and think of this as more of a group SMP rather than a big nice professional server. The server has been running for around 6 months now and I want to keep it up for as long as possible to create an old and large urban area over time with history.

NorthMC is a Minecraft server unlike any other.
With only one gameplay rule to follow. No hacking. This server has kingdoms, towns, factions, wars, all set in a massive world where you can play however way you want to, without being restricted by a hundred plugins. This is a server where griefing isn’t frowned upon but is an integral part of how the game is played.

The server has an active and generally friendly community, and we love new players joining.

Build server for both Bedrock and Java builders since it’s a Java server running Geyser.
It’s a chill place to build things from real life: Towns, Railroads, vehicles, etc for fans of my YouTube.

To become a [​Worker]:
Simply take a trial where you build a realistic 1.5:1 scale diorama to be approved. More instructions at /spawn.

For Console(Xbox One, PS4, Switch, etc.), please watch this video, you require extra steps to join. 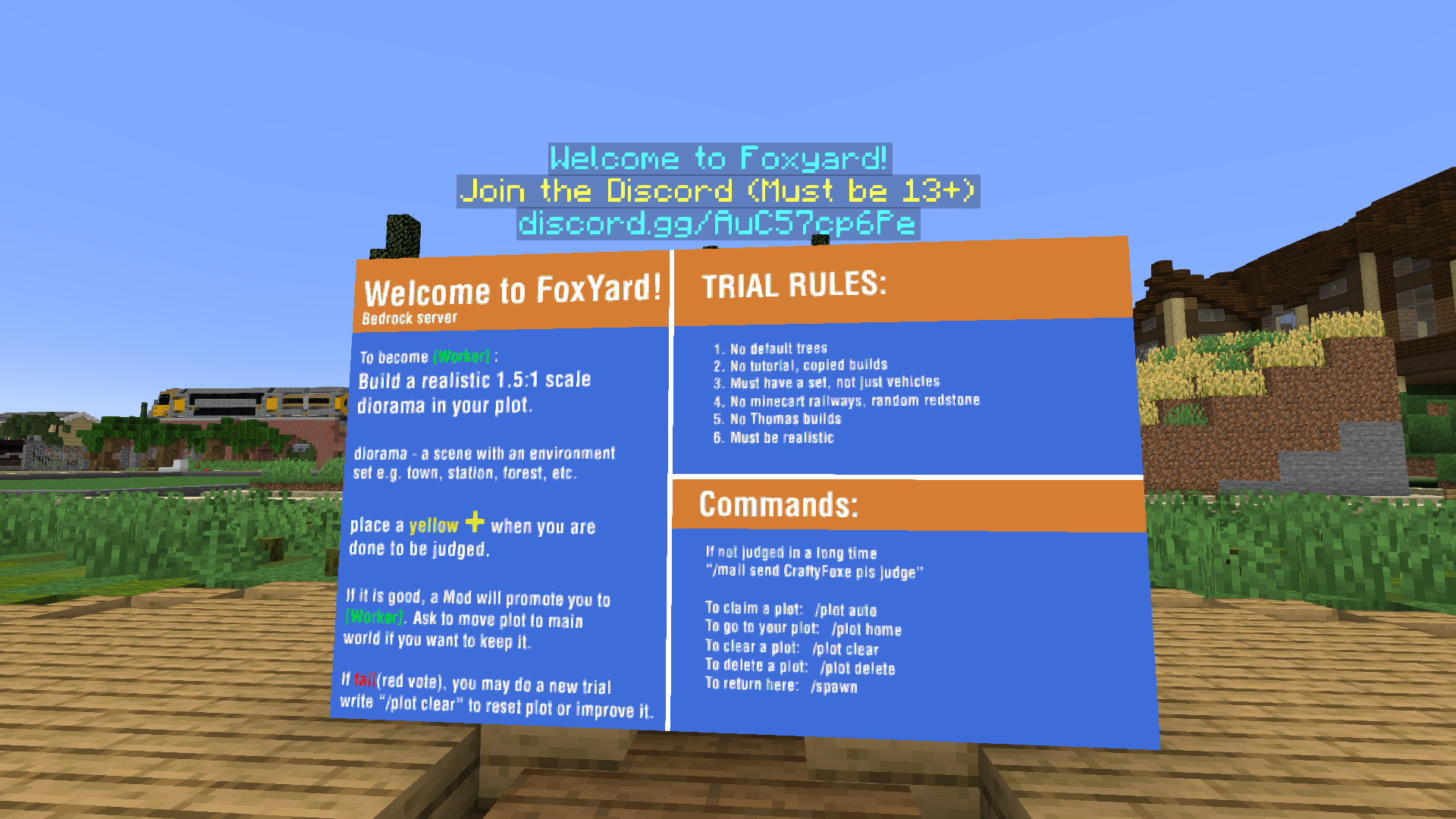 *If you are interested in a stricter standard of realistic building, check out FoxShot (java only)

Come and Join a nice relaxed Minecraft experience with a nice community and even nicer opportunities. Join one of the various established groups or create your own! For a better experience we have put in an array of plugins. Come join our community, and Welcome to the Pioneer SMP.

This server is WHITELIST only, to join please join the discord:

CityTown is a server in which a civilization is being simulated and stimulated. In CityTown, the goal is to make as much money as possible, be it through mining, starting up businesses or other side hustles. While competing against other players and businesses, you help each other by setting up an even bigger city leading to a more populated and complete city. You build your own city! We wish you good luck and have fun!

SMP Knight ﻿is a towny and SMP server. SMP is Survival Multiplayer and Towny is a plugin that allows people to make towns, invite friends, make nations, claim land etc. There are also features like sieges and wars.

﻿This server has a small friendly community which is moderated by an active staff team, it has a player based economy. Players can make shops, do jobs, PvP etc.

I hope to see you online, and have fun!

This server is a fun community hangout, own a house next to the breathtaking views of the lake or even get a cup of tea at the cafe in the heart of our town.

Perhaps relaxing isn’t quite your forte, we also have jobs available. Fishing and grinding for cash. By doing so you purchase a sleek new elytra and flex it on all your fellow server members.

No matter what your interests, we are the right place for you.

Dude, you can even get in-game money for sitting down and doing nothing, what’s not to love,

This place is paradise!

Having problems joining?
Type out: clarecraft.mc-world.net without 25658

Interested in becoming a mod?
Fill in this form here!
https://forms.gle/t2UPYvDxN1MZjeWE7

One of the world’s longest-running Minecraft servers; we’re a community of creative players and city builders

Project City Build (PCB) has been running since the early days of Minecraft Classic (circa 2010). With our free-build Creative and Survival multiplayer maps, we offer a fun platform & building experience like no other.

Take part in our friendly community, join in our regular build events or have a chat to us in game or on our discord server: discordapp.com/invite/Wkr2GbJ.

We’re a small and friendly community that always welcomes new members. If you’re interested in building things, this server is perfect for you. Reach out to one of our friendly staff anytime if you need assistance.

We’re chill. We stream.
And we make a lot of meme.