A little bit about us
Bored of standard Survival? Want to play with a fast growing, friendly community and be accepted no matter what age? Join our brand new fully customised Survival Server today!
JustySurvival is a Survival Server Like No Other, with so many custom plugins & active server developments! There is tons to do on our EPIC server! Grab your friends, start a base and build together!
Don’t just take our word for it, get in and check it out yourself! 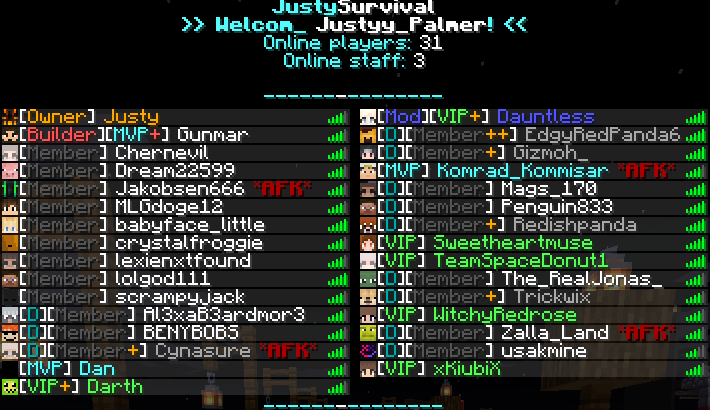 These are only a few of the great features our server has to offer:
➤ Land Claiming – Claim land & live with friends
➤ MCMMO – Level up Sword, Axe, Mining, fishing Skills! etc.
➤ Economy – Grind money by killing mobs or Questing.
➤ Player Trading – Trade with others securely.
➤ Chest Locking – Use a sign to lock chests and keep people out!
➤ Gates – Build a castle with a HUGE gate, open and close it to let people in/out!
➤ Weekly Events – Custom Events every Saturday!
➤ PVP – Kill someone and steal their head to hang in your base!
➤ Leaderboards – Compete with others to be the richest!
➤ Player Shops – Run the economy with your very own shop!
➤ Auction House – Have bidding wars on special items!
➤ Jobs – Enrol in a job and earn some cash!
➤ Level up – Level yourself through season one [​1-30] and unlock EPIC rewards!
➤ Weekly Market – Grab items for the NPCs at the market to earn some in-game currency!
➤ Quests – Follow the questline to earn special perks and items.
➤ Levelled Mobs – Want more of challenge? Stronger, faster and mobs with more health spawn. 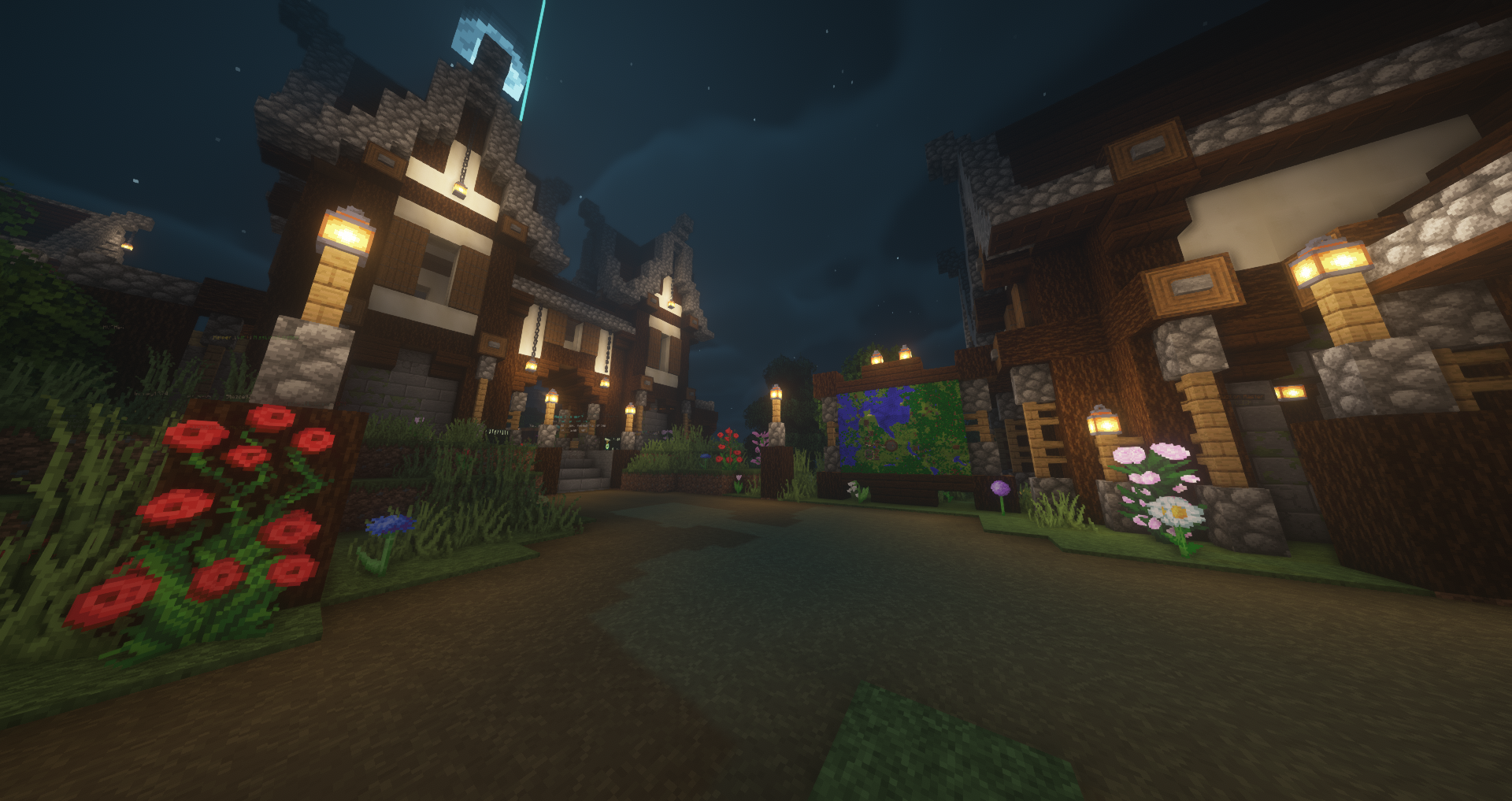 Staff Needed:
With the new release of our Server – we of course need some staff! Positions below:
DO NOT – Join and demand a rank. 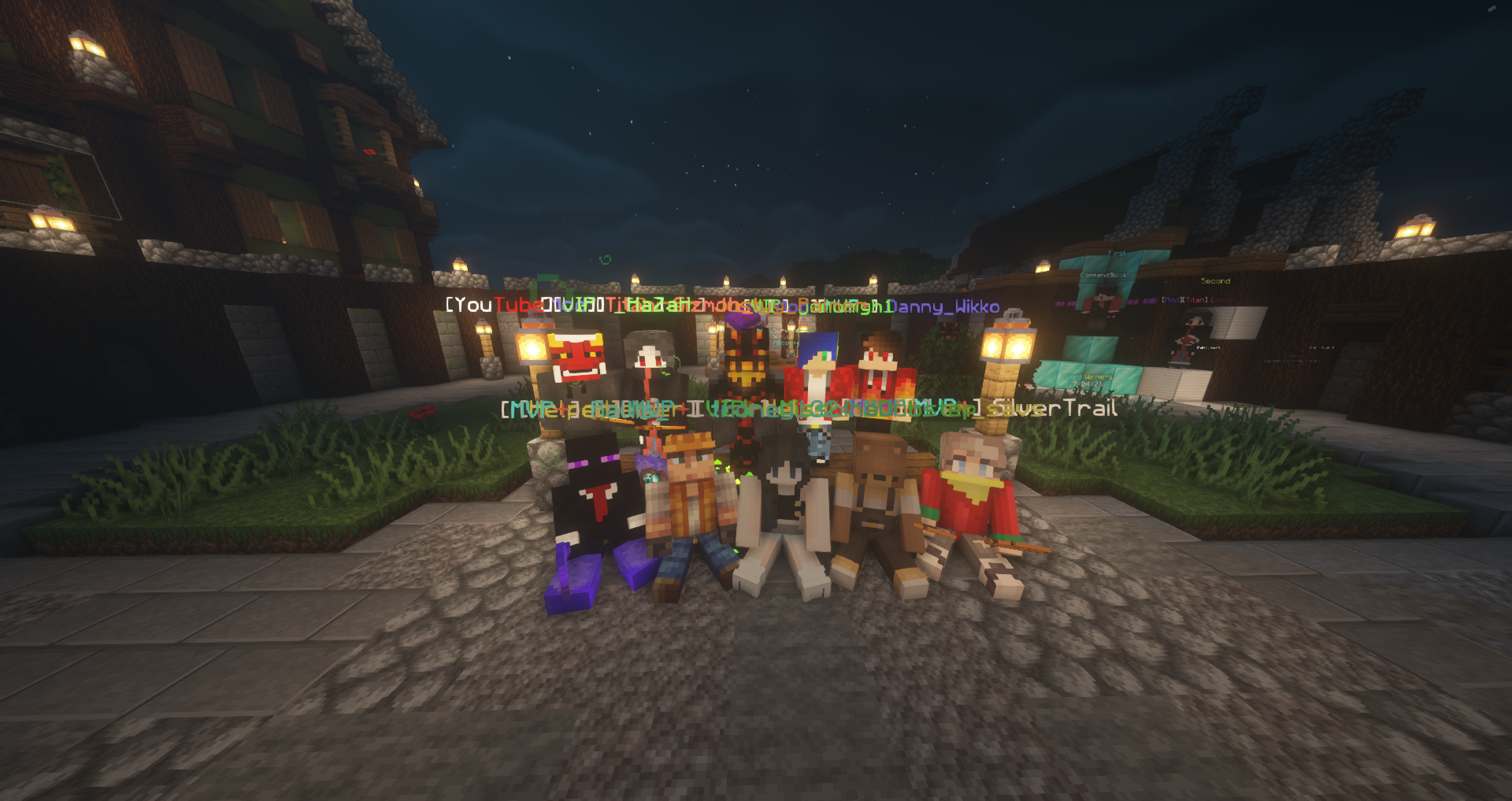 Friendly Community.
Server Application
The server is not whitelisted, however if you want to kick start your experience, fill out the application form below, reply to this thread and receive $5000 In game cash!

1-Minecraft Username:
2-Do you have Discord?
3-Have you joined our server discord?
4-What do you find most interesting about our server?

Thanks for viewing – See you in there!

CCNet is back, with two new gamemodes!

Simple Factions is a small but new faction server that supports and clients including cracked clients. updated to support clients on 1.14.4 – 1.17.1 and newer. This server includes features such as.. Factions, PVP, PVE, Player bounties, Chest shops, Player based economy. and etc. Join us today!

join unknown smp today!
we are an active server with a friendly commuity we also have a minigames server!
we have a friendly staff team too!

thanks,
the unknown smp staff team

RomanMC is a small Factions + SMP + Skyblock server that we started with an aim to add our own twist to Minecraft. We wanted to create a server where there is so much content that one will find it hard to catch up with all the things that are doable. Not just that, with daily updates, there is no room for getting bored with us! We are a small server, only a few months old and would love to have new players play with us and help us grow! We have the potential to be one of the best out there, and all we desire is a playerbase that helps us get there! With one of the most versatile servers, don’t take our word for it, come check us out yourself!

For a fun, lighthearted yet content-full server, don’t let yourself miss the opportunity to play with us, a server that you can call home! We would love to have you play with us!

If you’re looking for a friendly community and updated server, Quantum Galaxies is the place to be.
We are currently offering the following gamemodes:

We will be adding updated gamemodes regularly. Join from 1.8 – 1.17

Hello, my name is imbetterthanu61, I am the owner of FBGM. Id like to mention that currently this is an open beta of the server meaning there will be bugs and lots more to add. Anyways FBGM is an op survival that has lot of fun mechanics added to make playing that much more fun. If you want to know what they might be, you’ll just have to join and find out ;D. Although we do want to keep making our server more fun so recommendation are always welcome. Anyways in the mean time enjoy playing , hopefully we see you on 😀

About:verona.mcserver.us
Looking for a small community of friends to join?
Welcome to Verona!
We are a BRAND NEW survival server with a small, welcoming, and growing community. 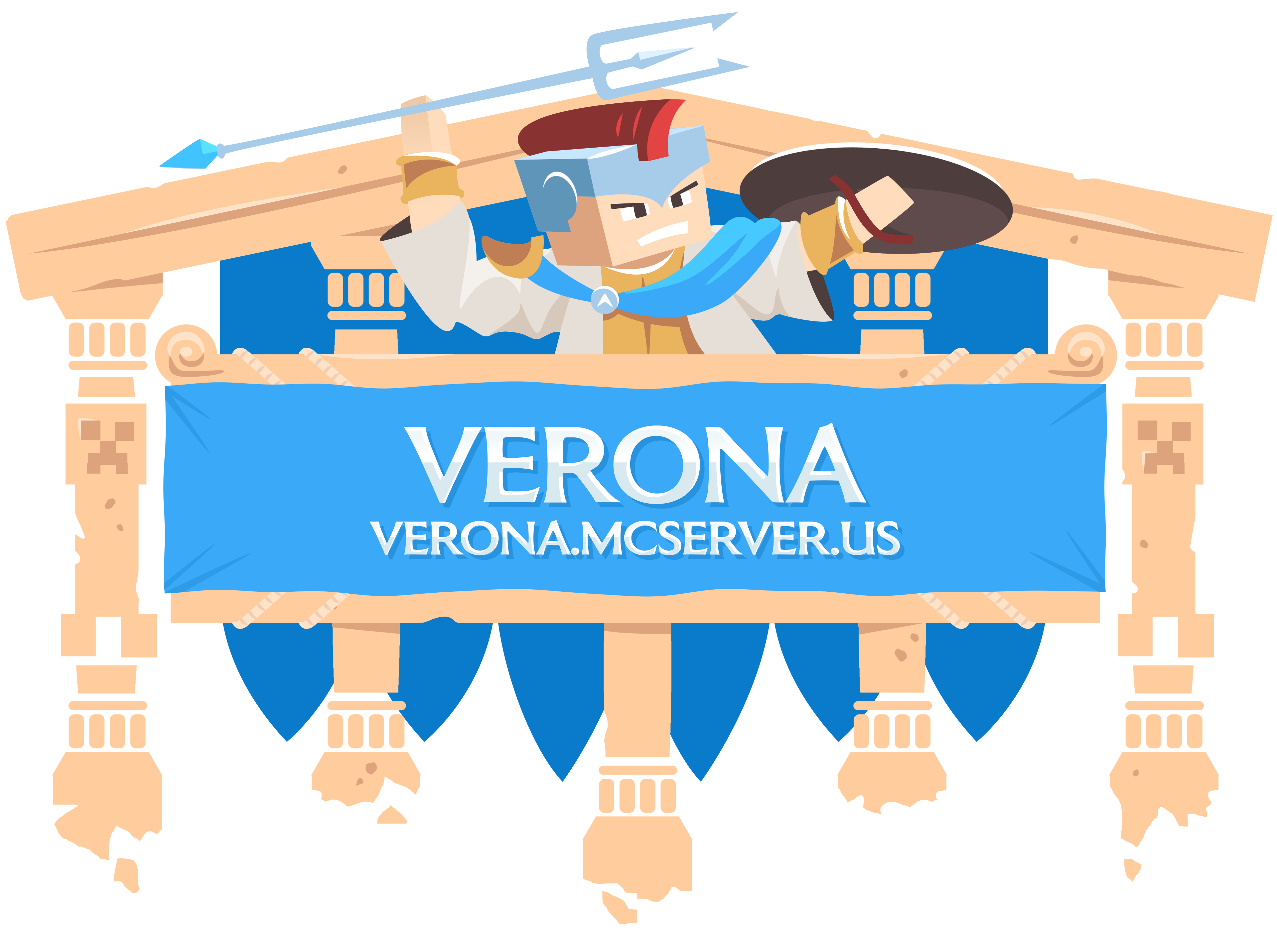 TTAC is a basic vanilla server with a few added touches to help with hackers, cheaters, and x-ray. We have an active community, filled with nice players and amazing builders. We encourage co-op on the server and players are rewarded for bringing a friend(s) on. We also have a voting system and rewards which help the server grow across serval websites. TTAC is becoming bigger and better everyday! Are you the next leader? The Journey begins here. 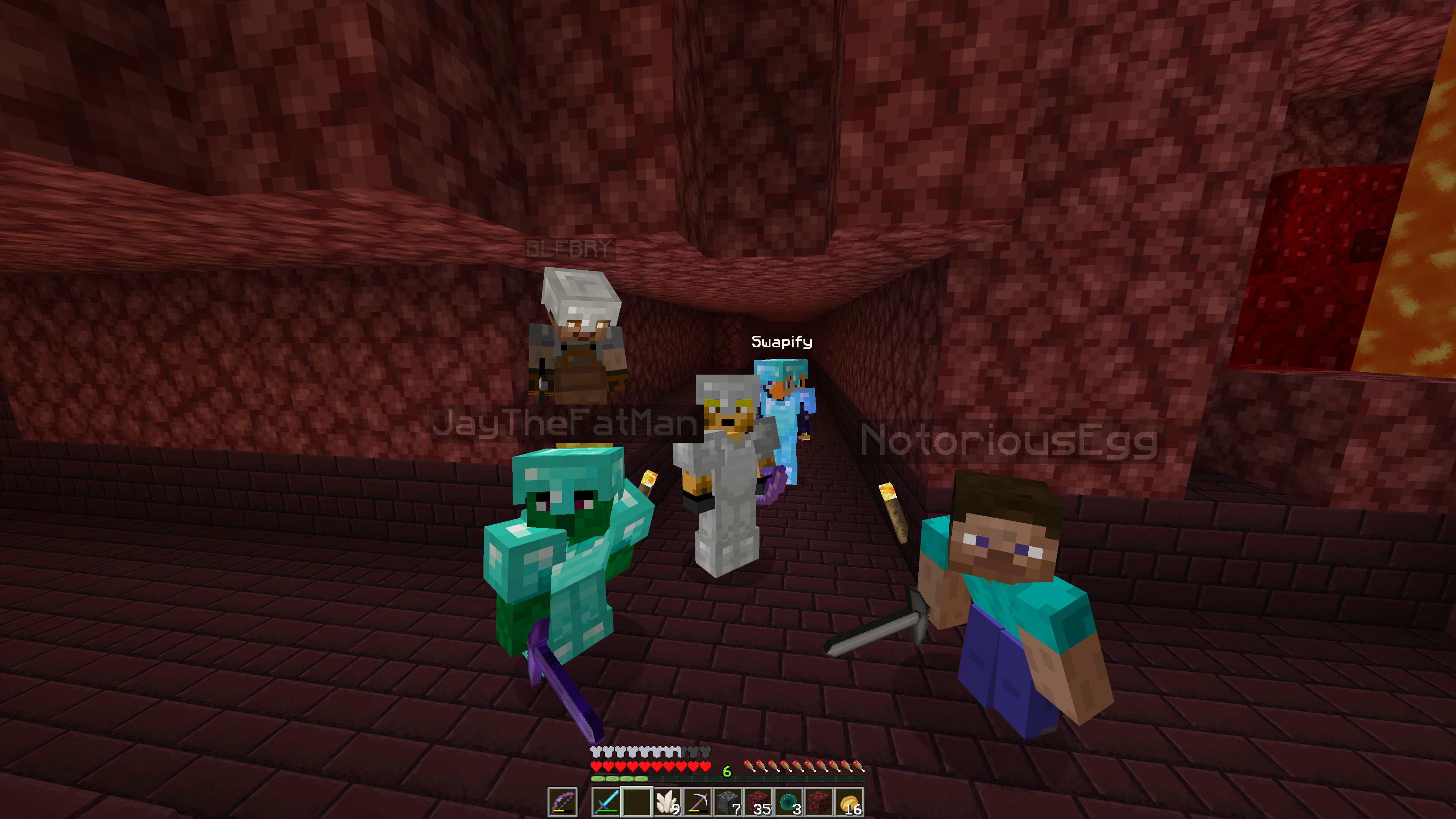 Spawn Protection! Walk!
Overworld and Nether: backed up daily
End resets every 30 – 60 days (Nothing Is Safe!!)

No Hacking, No Cheating, No Exploiting, No Racisms, No Lag Machines, No Threating, No X-Raying, No Bullying, Keep Chat Clean, Don’t Be Dumb.

Recendly re Opened. Still lot to do! But completely playable!