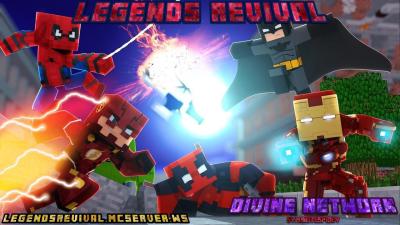 Legends Revival
Legends Revival!?!? What even is that….
Well, Legends Revival is a reboot for Divine Network’s Legends Uprising. Reboot meaning a start-over or reset. As a staff, we decided that Legends Uprising needed a reset, especially due to its extensive glitches, bugs, and most importantly, lag. When we started creating Legends Revival, we took the core aspects of Legends Uprising, such as the quest system, and redid it. On Legends Uprising, there was a lack of questing. There would be a few out of proportion quests here and there, some short, some that didn’t even work, and some that just didn’t feel right. There was an attempt of a server storyline on Legends Uprising with the starting quest with Nightwing, but as we all know, that didn’t go too far… When I first did that quest, it was super fun, and I was expecting it to continue and that I’d have a chance to talk to Tony Stark or Nightwing again once I teleported to spawn in order to continue whatever happens next, but there was nothing, I was thrown into a quest, taken out, and then thrown into survival, which sucked. On Legends Revival, however, the server has a storyline. Another thing I noticed while skimming through the announcements and suggestions was that most players absolutely hated Galacticraft due to the extensive amount of lag that it caused, so when creating Legends Revival, we decided to completely remove Galacticraft and its add-on, MorePlanets. Another mod we removed was TwilightForest because allthough this mod was fun, it caused many glitches, the biggest of them being the creatures bypassing griefprevention. 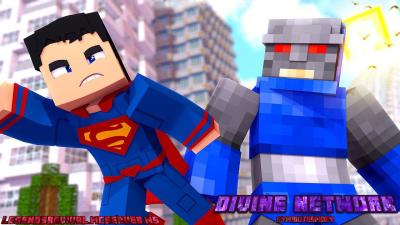 Storyline/Quest:
To summarize the story, the Marvel and DC universes collide with Thanos and Darkseid deciding to team up and rule over earth. Darkseid controls half of the now-merged Universe, while Thanos controls the other half. The heroes trembled and couldn’t do anything against the two titans, and although many heroes died fighting, others lived to fight another day. In the present day, our heroes are suriving in the shadows, most by them selves, others united together. When creating the storyline, we took inspiration from many comic books, games, and movies. For example: the idea of Thanos and Darkseid teaming up was taken from the latest Marvel Vs Capcom, in which Ultron and some other dude (don’t know his name…) team up. Once you start the storyline, the first few quests will be all about you obtaining your legacy/powers. We also know that not all of you like taking part in quests, so it’s optional, you’re not thrown straight into it. You spawn in the hub and you choose to go through any portal to explore, or talk to a certain NPC to begin the storyline.
Choose to be a Hero or VIllain:
We know that not all people are Heroes or admire Heroes, some of you may admire Villains, so we split the storyline in half. You either decide to be a Hero or Villain during the storyline, and depending on the choice you make, you’ll be given certain quests. For example, if you choose to be a Hero, you’ll be given quests only by the heroes to help them take down villains; however, if you choose the villains, you’ll be helping the Villains take down the heroes. This is an extremely nice addition, since it offers flexibility to all players.
Two Worlds:
When creating Legends Revival, we decided to create two different worlds. One named Safe Haven and the other named Dead Lands. Both worlds are meant for survival but are dramatically different.
Safe Haven:
Safe Have, as its name implies, is safe. How is it safe? Well firstly, Safe Haven allows players to claim parts of the land to make their homes. Secondly, Safe Haven doesn’t have destructive mode or mob griefing enabled, so the homes of all players are safe and protected from being grief by other players or mobs. Finally, Safe Haven doesn’t contain any ores at all, modded or vanilla, it’s just pure stone and dirt. Why did we do this? Well, we specifically did this because most players were asking for phasing, and since phasing is too OP in terms of getting ores, we couldn’t enable it if ores were within the world, so this world was made for those who like to phase. Players are also protected from PVP within their claims if they do not want to participate in PVP within their homes or don’t want to cause a ruckus in their home. The best feature about Safe Haven is that it’s a fully customized world that I created. It has floating islands, a crazy rising and caveish terrain that can’t be described, but is amazing for exploring and making awesome bases.
Dead Lands:
Dead Lands on the other hand, is not safe at all. Firstly, Dead Lands
has claiming disabled, so you can’t create a home in the Dead Lands.
Secondly, although destructive mode is off, mob griefing isn’t; mob
griefing is enabled, which means that other than players, mobs can also
destroy the homes of players if they decide to make one in the dead
lands. Thirdly, pick pocketing is enabled, so if you’re going to the
Dead Lands to get some precious ores, you must be extremely careful you
don’t take anything too valuable with you. Who knows, a Joker may be
lurking around a corner waiting to rob you of your precious items…
Finally, the Dead Lands has ores, both modded and vanilla, making it
risky but thrilling to get ores, since you have to go to such a
dangerous area to obtain them.Dead Lands: 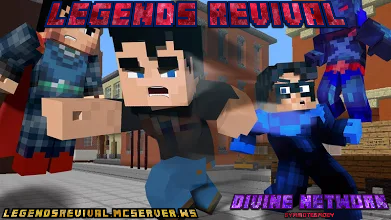 Arena:
On Legends Uprising, for some reason, there was no arena for players to PVP at, but on Legends Revival we do have arena to which you can teleport by going through its designated portal at the HUB. 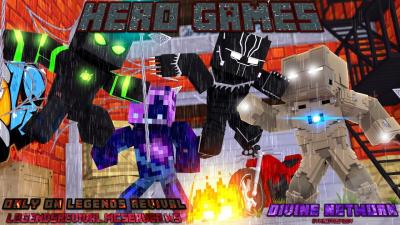 Hero Games:
Now, we know that Legends Uprising had a wash-down version of hero games that was called “sky wars”, but it was extremely boring. The maps would be glitched and some players would even fall out of the map when they spawned in. When a player knocked another player off, the player falling into the void wouldn’t die because of the Legends suits, so they’d have to take off their suit if they fell of, which was a rule, but there was no way of enforcing it… On Legends Revival, we wanted a minigame in which players can use server provided suits to battle other players, whether those players be friends or enemies, and whether the battle be competitive or just for fun. However, we didn’t want Legends Uprising’s version of it… Taking inspiration from the old Superheroes Unlimited Server, I decided to recreate the actual HeroGames as most of us Superheroes Unlimited players know it. This is the biggest and most fun part of Legends Revival, Hero Games. There are two seperate gamemodes, one for heroes and villains, and the other for horror suits. I didn’t combine horror and superhero suits, since it’s unbalanced and some players like the superhero suits, but despise the horror suits, or vice versa. Currently, on release, there are 3 maps for the superhero/villain part of HeroGames, and 1 map for the Horror part of HeroGames. Obviously, we’ll be adding 1-2 maps every week for you players to enjoy!
Hero Games – How to Play:
In order to play, first make sure that you have a friend with you that’ll participate, since you can’t play by yourself (duh…). Once you’re ready, do /HeroGames to be teleported to the HeroGames lobby. You’ll notice that your inventory will be gone/cleared, so don’t panic! The HeroGames lobby has a different inventory than every other world, meaning that when you go back to one of the other worlds, you’ll get your items back. Then, go up to the board that displays all maps, and right click the map that you desire to play on. The first player who right clicks becomes the host of the game and can choose the game settings, which includes effects that all players will have. Then, other players can join in and use the diamond sword in their inventory to right click and choose a team (Red or Blue), right click the paper in their inventory to choose a kit they have unlocked, right click the Steve Head to see all joined players, or right click the piece of redstone to return to the HeroGames lobby. Once everyone has picked their kits and chosen their teams, the host will rightclick with the fireball in their hand to start the game. After this, the game will start after 20 seconds and once started, will end after 20 minutes or when one team wins by wiping out the other team.
HeroGames – Unlocking Suits:
Now, as you probably noticed, I mentioned above that you can only use suits that you have unlocked in HeroGames, but how do you unlock suits? Well, when you first join the server, the citizen rank comes with 2 heroes, Robin and Kid-Flash. As you rank-up, you’ll be granted 1-2 more suits to use in HeroGames. Another way to get suits that you don’t unlock after levelling up is through /herogameshop, which will open a GUI from which you can purchase suits to use in HeroGames with in-game bal. Another way to purchase suits to use in HeroGames is via buycraft. You can either buy suits to use in HeroGames upfront, or buy a rank and be granted certain suits. We made it so that you can purchase HeroGames suits in-game, so that it’s not fully pay to win, since there should be a grinding aspect to it as well. Below is a list of all ranks, including donator ranks, and which suits it comes with to use in HeroGames.
Non-Purchasable Ranks: