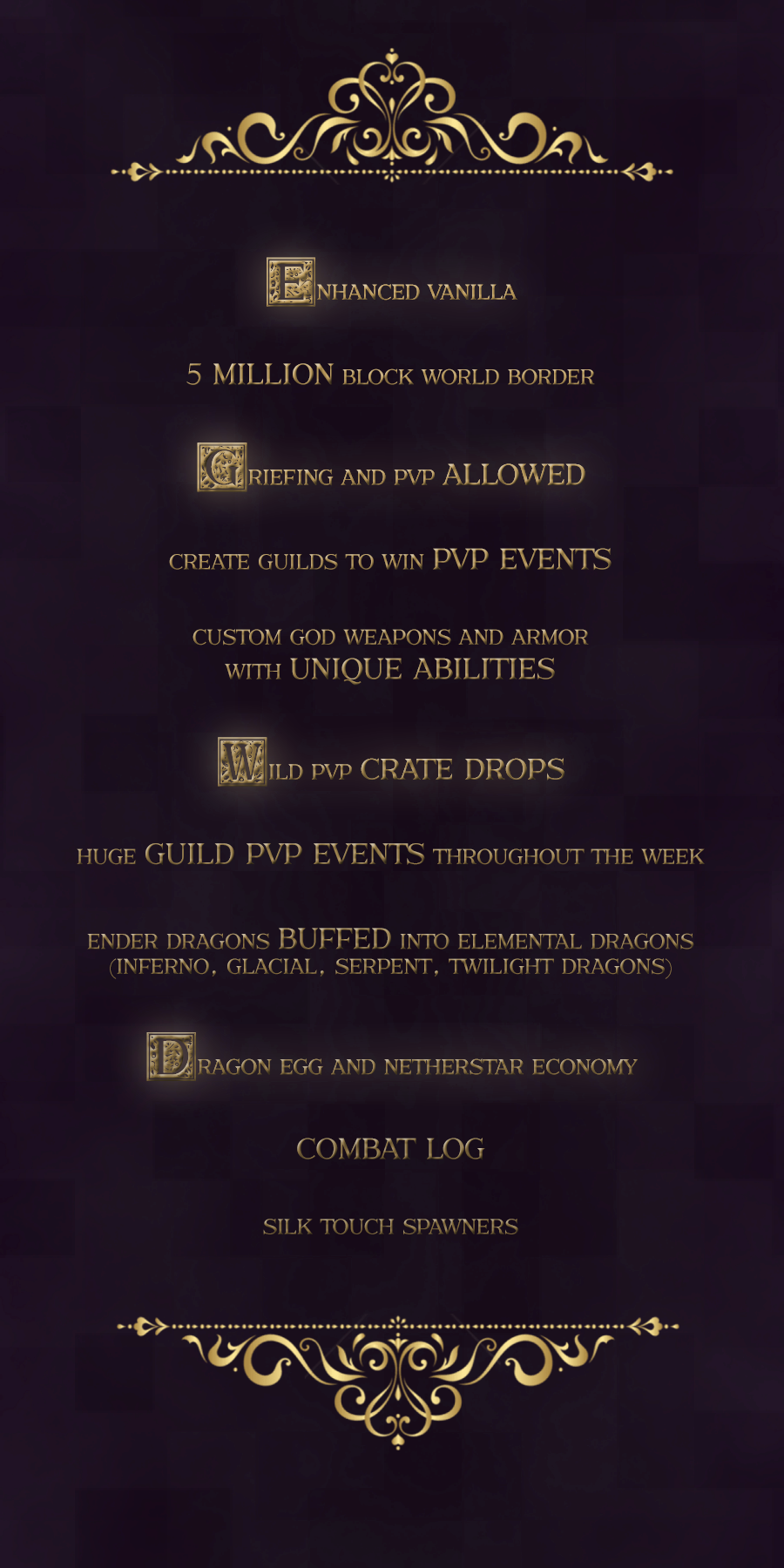 Pack your bags and weapons; make sure your coin purses are tied tight. Move swiftly and don’t leave anything behind. To the docks you go all the ships are filling fast. That last one there seems steady. Step up and get settled a long journey awaits; sail 3,000 miles across the Trackless Sea to riches and dangers in Anchorome. Where friends are waiting and enemies are plenty.

Every day and every hour the story changes and grows. Gildorym hosts several Dungeon Masters, New and Experienced, along with a solid roleplay community. Find out what your characters would do if they were not in a dungeon or fighting bad guys. Gildorym expands on the Dungeons and Dragons roleplay by adding the day to day tasks: Farming, Selling, Arguing at your neighbor who plays bardic music too loud.

Gildorym is a Minecraft server but Minecraft is one of the best places to host Dungeons & Dragon events. Each block in Minecraft is a square on a Roll20 or Dungeons & Dragons playing board. While Dungeons & Dragons has figurines and intricate setups to pull you into the scene at Gildorym we build the scenes allowing you to explore the map non-stop and finding new things every time. Step back from the board and come see your surroundings from the point of view of your character.

MMOs try to say you can be whatever you want in their games; but can you really? Besides being a god you can be anything its how you want to roleplay: Are you a savior? Then be a hero or a healer, Do you think you can bend the will of others or cause mayhem then be a villain or a politician, Do you want a peaceful life with no responsibilities be a farmer, merchant, or raise a family. You could rule a town build alliances with other towns and turn it into a kingdom and create a royal line and more.

But we don’t want to just build an area and force you to live in it. No, we bring the roleplay aspect forward and allow groups of players to build their own cities and their own towns creating the story and giving the Dungeon Masters places to play and tell a story. That’s not all hold your gear in your hand, wear it or don’t. We have lore-texted loot distributed by Staff members to bring roleplay to the next level.

Run events with different people and different Dungeon Masters. The main story is called World Events they are run with at least 3 Dungeon Masters running either each day or the same day with three different groups. Each group changes how the other ones progress.

Example: If Group A (Level 1s-5s) are in charge of defending the base camp so Group B (Level 6s-9s) can have a place to come back to. Say Group A gets overwhelmed than when Group B is done with their event and returning they may come to a destroyed camp, dead allies, or have a wave of monsters to fight after their own fight.

We don’t want the story to be stagnant we want to see wins, losses, victories, and defeats. Only then can you really treasure climbing over a difficult hurdle and winning a dangerous situation?

1. 24/7 Roleplay with scattered Dungeons & Dragons events
2. Take part in Multi-Dungeon Master ran world events (Simultaneous 6 man events happening in the same event
3. Player ran towns, villages, and cities
4. Wander on a 3D map take a look from the POV of your character
5. Play who and how you want. Be a Hero or Be a Villian
6. Two roleplay styles (be a Combatant/Adventurer or a Non-Combatant/Civilian)
7. Lore-texted loot & items
8. Explore other areas as the story progresses (Fey Wild, Waterdeep, etc)
9. Build in the Creator World (Non-Staff Campaign world) Host events even if you are not a staff member. Make your own story for the community that won’t change the main world storyline.
10. Play a character you can level up and fight with monsters or use our default Commoner Character sheet and never take part in events.