Skip to the content
THIS SERVER IS 16+, BUT WE’RE WILLING TO MAKE EXCEPTIONS IF YOUR APPLICATION IS GOOD ENOUGH!

Vellum is a roleplay community that seeks to foster a community of collaborative storytellers and writers. Vellum is the perfect place to meet fellow Minecraft roleplayers, forge new friendships, and create wonderful stories!

Our staff team has full transparency with the player base. Every decision and punishment made by the team is explained in a discord channel.

What else does Vellum have to Offer?

Vellum doesn’t just cater to character roleplay! Using the Towny plugin, players can form towns and nations to wage war with each other. Will you be a ruthless conqueror that wishes to expand the borders of their nation? Or do you wish to be a diplomatic mastermind that finds strength in allies? The choice is up to you!

Tired of lore that copies Tolkein’s work? Had enough of simplistic good and evil background nations? Well, we have something just for you! Vellum’s lore is an original piece of writing that is easy to understand. The world is set in a medieval setting with some fantasy elements added to spice up the lore.

Here is a snippet of our lore:

In the wake of a massive race war between the humans and the Thrali, tensions have never been higher. The humans, with their superior technology, among which include the vaunted, and deadly, Fluxbow, fight an endless war against the Thrali, whose strength and power allowed them to keep the humans at bay.

However, no war is truly sustainable. After 20 years of fighting, the resources of the land have been bled dry. Quartz, a necessary resource for the creation of the Flux Bows and their power source, have been mined till none left could be mined.

Luckily, or perhaps unluckily, rumors of a new continent to the far west have sprung up. Of a land ripe with resources for the taking. It was an opportunity. For those who sought refuge from the war. For those whose desires could no longer be satiated in a war-torn land. Even those who labored to fuel the ongoing war. All began to congregate in the new land of Ephemera.

The full lore of the server can be found in a google document. A link is located on the discord server.

You’re probably itching to jump into the server right away! However to make sure that everyone has a wonderful time and that only the most wonderful stories are created, you must fill up and an application form and create a sheet for your character using our template. You might think this is cruel, but you’d be surprised at the amount of people who apply without even reading the rules!

Dedicated and Active Player base

Vellum has a small yet active community that is ready to craft wonderful stories! The server is most active during EST afternoon-evening.

How does roleplay work on the server?

Vellum’s server is equipped with the Medieval Roleplay Engine plugin. Players will roleplay in a separate chat, accessible by typing /rp in the chat. Actions can be roleplayed using the /emote command. Messages sent through these commands can only be read in a limited distance from the player to prevent metagaming.

How do I join?

In order to ensure roleplay quality, this server has a whitelist. Before you can join, you must go through our application process. To do so, simply join the discord linked below, read the rules, and fill up the application form.

Umbril Roleplay is a fantasy apocalypse survival roleplay server with hints of scifi .

The server is whitelisted, and is as easy as making a character bio and posting to the enjin forum! You can find all the info on races HERE, as well as info on professions and skills. Then you head over to Character Bios Forum, fill out the provided template, and wait for a staff comment. You’re approved if you see an EXP LOG comment, and may then join the server! If there’s any issues staff will work with players to correct them.

We host a variety of races, many standard high fantasy races, such as Humans, Elves, Dwarves, Orcs, Halflings, Gnomes and more.

We have unique world and race lore, a new 10k x 10k+ custom map, and host the opportunity to become a vampire lich overlord or even just a simple farmer!
The Basics:

Umbril is a hardcore roleplay server, recommended 16+, everyone playing on our server is always IC. Pvp is thru roleplay and our custom combat system. We enforce whitelist, but it’s not hard to apply. Be sure to check out our rules!
Our server allows for unique creation of characters, we do not function off of a class system, but rather a Skill and profession system. This allows players to remain balanced and creates a large variety of options. Our server also has custom skill abilities, and race skills and abilities which shake things up!
Setting:

Spoiler – click to reveal
In 60486BE, the world populated by humans had reached the peak of its technological advancements. Having transcended experiments on human kind and beast and building its massive cities. They warred and competed to snuff out their competition and claim rule over the lands. Cities fell as quickly as new ones were born, and the surface of the planet was marred with the ruins of it’s past. One country rising above the rest with the efforts of its capital, Thies.

The scientist in Thies, the new capital of advancement, both moral and immoral had started developing and working with other dimensional gates. Not satisfied with merely dominating their own world. For the longest time, they knew of both the existence and presence of other-dimensional beings, Dragons, as many knew from myth, and strange creatures glimpsed in the nightmares of the scientists, but they couldn’t crack the secret to these worlds, that is until they had a breakthrough.

A scientist by the code name of —–[​Redacted], had crafted a small gate, showing a hint of the worlds beyond, but these worlds were dark, destroyed and ravaged by their inhabitants. He’d shut down the experiments, vehemently defending that larger gates could let in all manner of monstrosities to the world. His superiors found it merely a means to power and progressed the experiments. In a year the powers had constructed a massive gate under the city of Thies, activating and testing it frequently, all tests ending in curious anomalies around the city, disappearances of its citizens and unexplained destruction. The powers continued their experiments despite the warnings, and at the end of the year, Thies and the world had changed.

What remained of the once powerful capital was a crater, a rift in time spewing dark creatures from its depths, and many more anomalous portals cropping up on every continent. Some fed in new peoples, others dark horrors. Magic also surfaced upon cracking open the gates to the Highlands, a place known to be the homeland of elves. This magic unbalanced the world, feeding the dark creatures, and leading to the devastation of many settlements, unprepared to handle the monsters from beyond.

Small bands of people still managed to survive, some by teaming with the magical beings from the other side, and others remaining secluded, and after 100 years of their struggles, the Dragons made themselves known. These massive beings sought to right the destruction of the world, one of many they had observed over eons. However, their brother, Halladrin, sought to work against them to continue his pursuits of corrupting the magical races, and any new beings born into the world. His brethren wouldn’t stand for his attempts, and in 180Ae, they warred to seal him in the mortal human realm, hoping to cap off his influence and corruption, and prevent the world from becoming another dark dimension. They did so with success, but at the cost of Mirelth, the spirit dragon.

The world seemed to stabilize considerably with the aid of the dragons, the humans naming them Greater Dragons and beginning to worship them aside their own gods. Cities grew and populations mingled with races of all manner and soon the dragons melded a land for themselves on the plane, remaining.

The remnants of Thies had moved to the small state of Caliophe, at the southern edge of the spine mountains, claiming the small state as the new capital. The state holding many of the secrets of the once great Thies, and worked with the countries of Breganahm, and Luphioti to find ways to protect the descendants of the survivors of the event, and to keep their world. Meanwhile their rivals, and leaders of other nations wished their demise as the world was only just recovering and they banished the use of technology for fear of another event. Technology had caused the suffering, technology had led to the destruction of families and population, and nearly the extinction of humankind, instead they adopted simpler lives across the seas.

In 200AE, ambassadors of Caliope and Thies sent a group of people to create a settlement on a series of islands crafted by the dragons as their sanctuary. The town came to be named Crow’s Point, and in 204AE it was open to immigrants seeking work. Some came via ships, but many more found themselves transported there via strange crystals. These crystals known to be connected to the distortions and gates of the past, a reminder of the horrors. A test to see if people could survive the dangers of the world, and perhaps find a way to remedy the past.”

A map of the world of Umbril Roleplay. Artwork ©empiredog 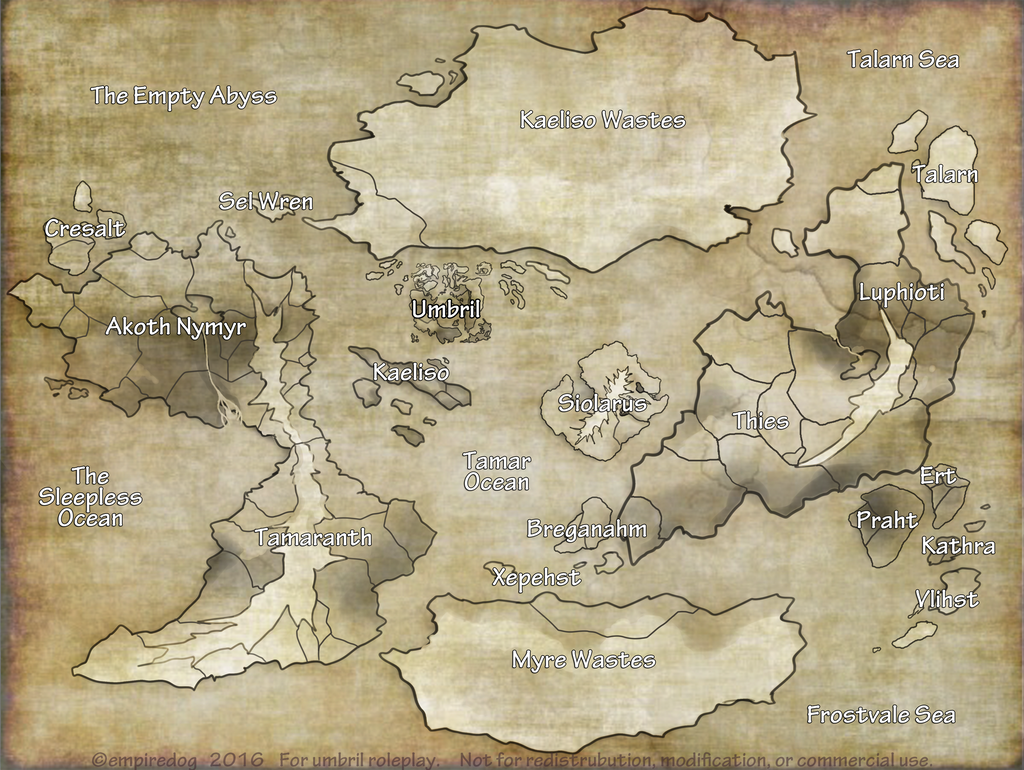