IP: play.vengefulmc.net
Discord: https://discord.gg/pkscrTC
About:
We are a fairly new network with the goal of making sure players have a fun, enjoyable, and lag-free experience.

No hacking or cheating of any kind on our servers.

We hope to see you soon!

TriumvSnap is branch of Triumvirate minecraft server, heavily Based on youtube show called Hermitcraft, running on minecraft snapshots. Our server was created for people who like building, expressing themselves and making a lot of new friends.

– the server on newest version of minecraft

– friendly and active community, with that characteristic hermitcraft vibe

– wasteland world, getting more and more destroyed, the closer you get to 0,0 of the size over 20k x 20k blocks (spawn is outside of that, in normal 1.16 terrain)

– friendly and active staff, always ready to solve your issues

To join the server, you’ll first need to join our Discord (link below) and introduce yourself to the rest of players. After that, if you meet all of the requirements listed in Disclaimer below, you’ll most likely be accepted as the member of our community, and added to the whitelist

Disclaimer: There are three requirements you have to meet if you want to join our community:
1. Be an active and dedicated player. If you want to join, play for hour and leave forever – this is not a place for you
2. You need to know what hermitcraft is (if you are watching it/ have watched in past, it’s even better)
3. As of now we are pointing towards getting players, who have outstanding building abilities (When you join the discord, prepare to show us some of your creations). If we consider your skills as good enough, you’ll become our member. As of now, we are not letting any more players that are into redstone, since we have too many of them

We know that these requirements (especially the last one) can make us look as not welcoming, and hostile community but don’t worry. As soon as you’ll join, you’ll realise that we are in fact bunch of friendly and dedicated players ^^

If you are friendly, cooperative player, familiar with Hermitcraft series, consider joining us! We guarantee you’ll not regret it!

milk, it is a server with no griefing, no pvp, no raiding 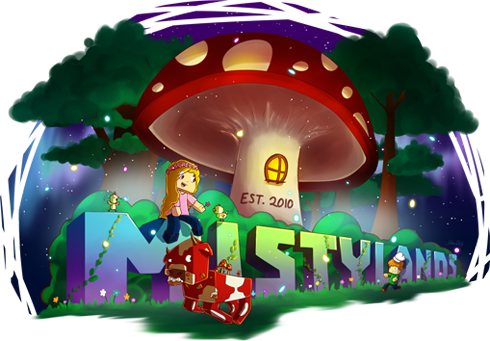 Welcome to MistyLands
EST. 2010
Mistylands started back in alpha 2010 and has grown now to become the mature and friendly server that we are today.

Mistylands is a Community focused survival server where you can play with Keep Inventory Enabled or Disabled and Griefing/Raiding is strictly prohibited.

The economy is community driven, with a variety of ways to earn money. You can join jobs, set up shops or list items on the auction house. There are also Quests to complete and over 400 Custom Achievements for you to unlock and earn multiple rewards such as economy, items and custom Tags!

To enhance the gameplay, we offer special abilities with McMMO, all with a custom config that will make the most dedicated of players shine bright. We also have over 100 custom enchantments plus a brand new pvp arena for you all to get stuck in to.

We have a whole new set of Voter ranks where players can rank up and gain access to a whole bunch of extra perks commands and other rewards.

We have much more to offer in game so we hope to see you soon!
We are looking for new players to join our friendly community, so come along and say hi!

Welcome to The Tavern, a whitelisted age 18+ JAVA Minecraft Server.
Apps are now open!
CLICK HERE TO APPLY ON PLANETMINECRAFT

What does The Tavern Bring to you?

* A long term map and community.

What are we looking for?

Rules of The Tavern

– You represent the community, act accordingly.

– Swearing is allowed. Targeted comments and harassment of any kind are not.

– Porn/R rated images are not allowed in discord or in-game.

– Don’t spam chat or voice except for our spam channel.

– Use bot commands in the bot channel.

– Advertising without permission is not allowed. Exception your arts & crafts in art channel. e.g don’t private message everyone a link to join another discord server.

– No cheating, stealing, griefing, glitching or exploitation of any kind

– No farms on top/above the bedrock in the nether. Don’t glitch or break bedrock.

– Repair damage done to public/wilderness areas. E.g you made a creeper blow up at spawn by accident.

– Do not build within 300 blocks of players/spawn. Unless permission is granted or the player has the neighbors wanted role in discord.
– Do not mine under/at spawn.

– Have a proper location for killing wither boss. Do not use the end portal or kill near spawn locations e.g the nether hub.

– Only spawn & market area has a specific build theme. Otherwise, build in any theme you want.
– PvP must be agreed upon.

– When claiming an ocean monument, stronghold, village, mansion or generated structures alike. Use our landclaim plugin to claim the area so people are aware its claimed and do not mine it out by accident. Or use indicators e.g signs, private signs in the area to let people know its claimed.

A refreshingly vanilla Minecraft experience,
with no grief, micro-transactions or vote rewards.

Social Hangover is a laid-back community of adult players. Our few rules are fairly relaxed and you’re pretty much free to do as you please.

Tired of plot creative servers? So are we! Create your own creative worlds to build to your heart’s delight. Building something on our survival server? Use our transfer tool to bring your builds over to creative in a snap. We’re super proud of what we’ve created so far and you’re going to love it!

Why change the recipe? We’re committed to serving up an authentic Minecraft experience. We’ve added a small sprinkle of enhancements to the vanilla Minecraft formula in the form of chest protection, random spawn points, player heads and armor stand editing. And we’re always looking for the perfect combination of toppings to make the damn sundae you’ve ever had!

Founded with love by a couple of Twitch streamers. You and your community are more than welcome here.

Build wherever and whatever you want. Let your creativity flourish!

❌ No teleports or warps

There is no /tp, /home or /spawn (we’re vanilla after all). Get around via an extensive ice highway network. There are plenty of places to visit!

No economy plugins! The economy is entirely managed by our community. Visit our shopping district at 0,0 in the overworld!

🤗 More than a Minecraft server

🛸 We out here on Discord – discord.socialhangover.net

We Offer:
A Comprehensive War and Battle System

Impressive Builds in the process of being made and exported to the server.
No Lootboxes or Pay2Win mechanics.

We hope that you will decide to give us a shot! Check us out on discord: https://discord.gg/xMFwwUb

If you want more information regarding BP-Survival just join our discord channel!

Come have fun with us on the server join now!